Sintons shortlisted in two categories in this year’s Dealmakers Awards

Newcastle-based Sintons has been shortlisted as Corporate Law Firm of the Year, in recognition of its strength and expertise throughout its corporate and commercial team, as well as in the Deal of the Year (below £2.5m) category.

Sintons has long had a reputation as being one of the leading corporate law firms in the North of England and has acted in some of the most significant deals of recent years. Recently, the team has enjoyed strong growth, with key new high-profile appointments being made including tech specialist senior associate Lucy Cook and highly respected solicitor Luke Philpott.

The firm has been shortlisted in Deal of the Year (below £2.5m) for its role in the merger of Warmseal and UTS, in a deal which saw manufacturing being brought back to the North East and ambitious growth plans for Warmseal’s national expansion being unveiled. Matt Collen, partner in Sintons’ corporate and commercial team, and senior associate Emma Pern, completed the transaction on behalf of UTS.

Dealmakers, run by Insider Media, is one of the most eagerly anticipated events in the North East’s corporate calendar, and gives recognition to the work of individuals and firms who have achieved excellence in their fields. The awards – which this year received an unprecedented number of entries – are open to banks, law firms, corporate financiers, accountants and entrepreneurs.

The shortlists are compiled both by an independent panel of experts, who judge the deal and dealmaker categories, with the others being determined through a peer voting system. The winners will be unveiled at an awards dinner on September 13 at the Hilton Newcastle Gateshead.

Karen Simms, head of the corporate and commercial department, said: “We are delighted to learn we have been shortlisted in two categories of Dealmakers, and are grateful to Insider Media’s expert panel and our peers for giving us acknowledgement in this way.

“Our team is well known across the North of England as being one of the most capable advisors around, and with over 220 years of combined experience across the department, we have the depth of knowledge and breadth of expertise to make us stand out in a crowded corporate and commercial sector.”

Philip Cunliffe, Insider’s regional business editor, who chaired the judging panel and oversaw the voting, said: “This has been a record year for the awards; not only did we receive more nominations and more entry submissions than ever but more people cast votes than in any previous year too. The interest in the awards has never been higher which means the competition is hotter than ever too. It should be another exciting night at the awards dinner.” 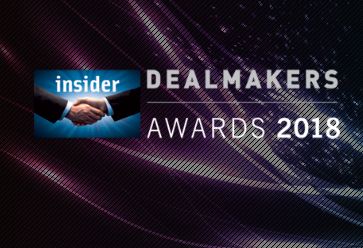