An organisation which provides training and employability services to people with disabilities is celebrating its 20th anniversary.

Since its inception, Momentum Skills has supported thousands of people in accessing the support to live independently and get back into work, positively changing the lives and prospects of people around the UK living with disabilities or acquired serious injuries.

And to mark its milestone anniversary, Momentum’s North East division has announced a new partnership with law firm Sintons as part of its efforts to grow its offering for the benefit of staff and service users alike.

The partnership with Sintons will see lawyers from across the Sintons business working closely with Momentum to provide support and bespoke training in a host of areas, including employment and HR issues and personal injury, to help develop the levels of support the charity is able to provide even further.

Sintons has worked closely with Momentum for some time, primarily through the law firm’s specialist neurotrauma department which acts for people across the UK who have suffered life-changing neurological injuries. Both Momentum and Sintons are recognised nationally for the bespoke support they offer to people in this area, particularly those with brain injuries.

The partnership was formally launched at an event at As You Like It in Jesmond, attended by professionals from across the North East.

Phil Davison, head of personal injury at Sintons and a leading specialist serious injury lawyer, said: “Momentum Skills is an organisation with which we have worked closely for several years and the team’s client-centric approach and commitment to their service users is very closely aligned with ours. We have been impressed by the support Momentum provide to people at what are often very traumatic times in the aftermath of serious injury, and have seen first-hand the service that is delivered by the team.

“We are very pleased to have developed this new partnership, which will enable Sintons to provide support and to deliver bespoke training to Momentum Skills in a host of areas. This is a very forward-thinking initiative which will benefit Momentum Skills staff and service users alike, and will support Momentum in looking to the next stage of their growth and development.” 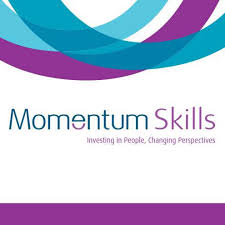